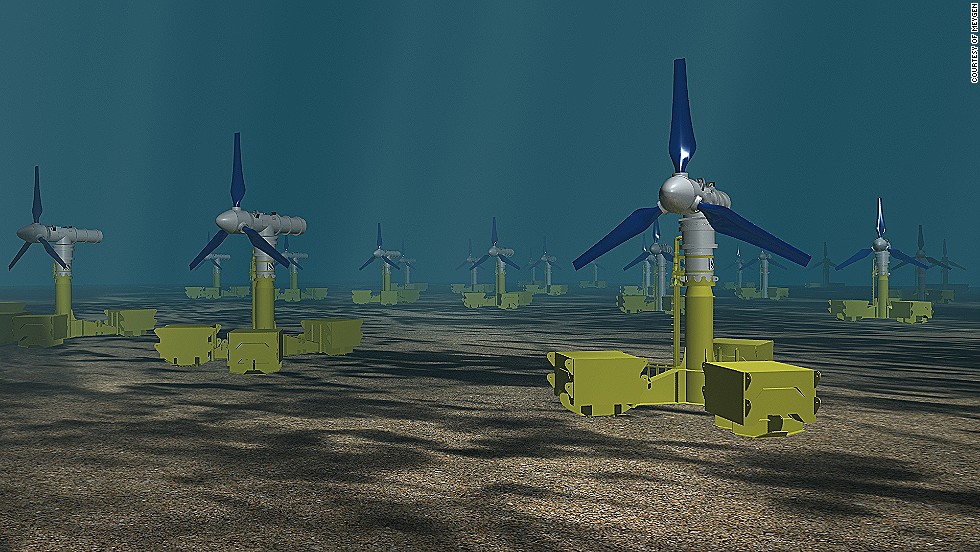 Next time you’re near the ocean, listen closely to the waves. That sound you hear? That’s wasted energy.

The energy from waves, tides, and currents, known collectively as ocean energy, is a massive resource just waiting to be tapped.

The total energy available along the American continental shelf could potentially provide roughly half of the current total US energy supply. With an estimated 250 TWh/yr for the West Coast, 160 TWH/yr for the East Coast, 60 TWh/y for the Gulf of Mexico, 620 TWh/y for Alaska, 80 TWh/yr for Hawaii, and 20 TWh/yr for Puerto Rico.

Harassing all of that energy, while transporting it to population centres and finding suitable locations along the coast that will not affect coastline ecosystems and property values would be a difficult if not an impossible task, but if we could find a suitable way to harass the power of the tides and waves off our coasts, it could provide the final push needed to convert out grid to a 100% renewable system.

There are many methods to gain energy from the sea. Wave power is created as the wind pushes the surface of the ocean. Ocean currents provide power driven predominantly by wind and heat from the sun. Some systems have even utilized the differences in salinity between rivers and seas to produce electricity.

However, today we are going to investigate one of the most promising technologies in this sector, Tidal Energy. It has huge potential in the renewable energy market thanks to its predictable and consistent availability. Tides change four times a day, every day.

What is tidal energy and how does it work?

Tidal energy is kind of a renewable energy generated by the natural rise and fall of ocean tides and currents. This is a result of the Earth rotating through bulges of ocean water formed by the gravitational influence of the Sun and Moon. We experience greater tides, called Spring Tides when the Sun is aligned with the Moon allowing their gravitational influence to combine.

This corresponds to the New and Full Moon phases of the Moon. And we experience smaller tides, and smaller differences in high and low tide, during Neap Tides

This occurs when the Moon is at a quarter phase, offset to the Sun by 90 degrees. Meaning our tides are not only smaller in total, but the changes in tide are minimized.

Generation of wave and tidal energy

While their intensity does vary, these tidal changes come 4 times a day and result in a flow of water that will look something like this,

For a Spring Tide and this for a Neap Tide. With the Spring Tide not only resulting in a higher tide, but a faster flow of water, which means more energy is available for extraction.

These patterns can be projected well into the future thanks to the predictable movement of the Sun, Moon and Earth. This definitely cannot be said for the unpredictable weather here on earth which affects Wind and Solar energy.

Despite this steady and reliable flow of water, ocean power provides the smallest percentage of renewable energy.

How is tidal energy used today?

With only two large scale tidal energy plants, a 240 MW system located in the estuary of the Rance River in Northern France, and a 254 MW system in Sihwa Lake in South Korea . Both are tidal barrage systems, which work similarly to dams by opening and closing sluice gates to control the flow of water through their turbines.

This is a proven technology, proving they can generate electricity and operate in seawater without corrosion being a massive issue thanks to cathodic protection.

So why are there so few of these systems in the world. The problem is two-fold.

First, the cost of installation is incredibly high requiring a very large structure to control the flow of water. It simply makes more sense to use other forms of renewables like wind and solar.

And second, a large barrier like this has a significant effect on the local ecosystem. One company, Simec Atlantis, is looking to improve on both of these points with their underwater turbines which look remarkably like normal wind turbines, but thanks to water’s higher density can be much smaller.

Their first prototype system was placed here in the mouth of Strangford lough in Ireland. This area benefits from some of the fastest flowing water in Ireland, as tides force their way in and out of the bottleneck of Strangford Lough. Millions of tonnes of water flow through the channel every day.

The system consisted of two 16 metre diameter turbines with a nameplate capacity of 0.6 MWs each. For reference an equivalent wind turbine would have a diameter around 40 metres. These turbines reached full capacity in November 2008 and were decommissioned in May 2016.

If that 1.2 MWs ran continuously at full capacity for all that time it would result in about 77-79 GWhs of power, however, it only produced 11.6 GWhs Enough to power around 1 thousand American homes for 1 year, but that’s just 15% of its full potential.

However, this was a prototype which did not run continuously and was routinely taken offline for inspection and research. In their best month, SeaGen produced 522 MWhs with a capacity factor of 59% and Seagen claim that is reproducible year round.

With a capacity factor of 59% year round this would make tidal energy an incredibly reliable energy source with only minimal storage needed to smoothen out the peaks and troughs between the tides.

With a short time between peak power generation and minimum power generation, this form of tidal energy could use cheaper short-term energy storage solutions like mechanical batteries to create a desperately needed renewable baseload.

This project was decommissioned in 2016, as part of the research process. It was vitally important to test whether these machines could be effectively removed from the environments with minimal impact. And this is of course a major concern for any machinery being placed into a marine environment. Seagen satisfied this requirement having no significant effect on the local ecosystem.

Seagen has since moved onto the next stage of their technology with Meygen, installed in between the Islandof Stroma and the North East coast of Scotland.

Their original lease agreement was for up 400 Megawatts, provided the initial testing phase with 4 turbines satisfied the environmental impact requirements.

The latest version of the underwater turbine now has 3 turbine blades, allowing for an increase in capacity to 1.5 MegaWatts with only a slightly increased diameter turbine over the 16 metre 0.5 MegaWatt turbines of their previous project in Northern Ireland.

This turbine is also completely submerged, so it is not an eyesore for local residents. Seagen previously had actuators to lift the turbine out of the water to allow maintenance to occur, but the new generation of turbines are designed so the actual turbines and generators can simply be placed and removed from the substructure in about 30 minutes Making installation and maintenance vastly easier and cheaper.

Environmental impact has been a central focus for the project and this started with a comprehensive survey of the surrounding ecosystem from seaweed and shellfish to the whales that occasionally visit the area.

The area thankfully has such fast moving water that the seabed was stripped of sand and silt, so the installation had little impact on ecology of the rocky seafloor.

The impact the installation could have on local marine mammals was of a much larger concern with surveys showing a large population of both seals and dolphins, with several haul-out areas for seals nearby Both of these mammals are sensitive to noise and will likely avoid any area with excessive sound.

The noise levels these turbines emit are not terribly high, as they move relatively slowly through the water. Their 544-page long environmental report indicates that seals will have a strong avoidance of the noise within 38 meters of the structures, while mild avoidance may extend as far as 168 meters. With seal haulouts over a kilometer away this was deemed acceptable. While dolphins are expected to avoid the noise up to 100 meters and filter feeders like whales up to 500 meters,

which may remove a small section of sea from use, but will not act as a barrier to any significant feeding ground.

A significant improvement over tidal barrages. This theory is backed up by surveys conducted during Seagen’s operation which found little evidence that the two turbines had a significant effect on the numbers of seals and dolphins during operation, but did have an effect during the construction phase where noise was much higher.

Area avoidance would be useful in the fact that it would prevent the animals from straying too close to the turbines and being struck by them. Potentially hurting themselves and damaging the turbine. Once again we can garner

some positive data from Seagen, which examined all carcasses discovered near the site and found no evidence that any deaths were caused by impacts to the turbines.

This seems unlikely but they theorize that these animals actually avoid the areas while the turbine is operating not because of sound, but because the water is flowing fast enough to make it too difficult to swim and catch prey.

The last major worry for these types of devices is the fact that they need to use toxic anti-fouling coatings to prevent marine growth on the turbines.

However Meygen uses a clever low friction paint that self cleans as soon as the marine growth grows large enough where the drag overcomes their ability to adhere to the slippery paint.

Additionally they trialed a sonar detection system that would allow them to track and potentially stop the turbines when larger animals occasional pass through the area.

Without a doubt, these types of turbines would have less of an impact on the environment than tidal barrages seen in France and South Korea, but only time will tell whether this system in the far reaches of Scotland will have a small enough impact to encourage additional systems to be installed.

Based on their estimated cost for a further 49 turbines at 540 million dollars, we can calculate that each would come with an installation cost of around 11 million dollars, so that would require 16.3 years to recoup the cost of installation Which is better than the 20 years it took to recoup the costs of tidal barrage system in France, and those numbers will likely continue to drop if the company manages to start manufacturing these underwater turbines on a larger scale.

But it’s slow going. Iterating and improving on designs for tidal power is much more difficult than other forms of renewable energy. Testing has to take place in coastal waters, most of which are public spaces, requiring extensive permitting and testing.

It’s unlikely that these underwater turbines will ever compete on cost with onshore wind turbines or solar, but thanks to the predictability of the tides this form of energy could provide a reliable baseload when combined with low cost batteries.

If this project succeeds if could justify Large scale manufacturing of these turbines and transform tidal energy from a small niche industry, to a huge player in the renewable energy industry.

After all, Meygen is just one small section of a larger 1600 MW ocean energy project earmarked for Pentland Firth and Orkney, with mixes of both wave and tidal energy.

A colossal amount of energy which could go a long way to diversifying Scotland’s power usage, and we will delve into the world of wave energy in a future articles.

In the meantime, you can learn more about other forms of renewable energies like solar by reading some of my past posts on the topic.