Practical Tips on How to Charge Solar Lights Without Sun 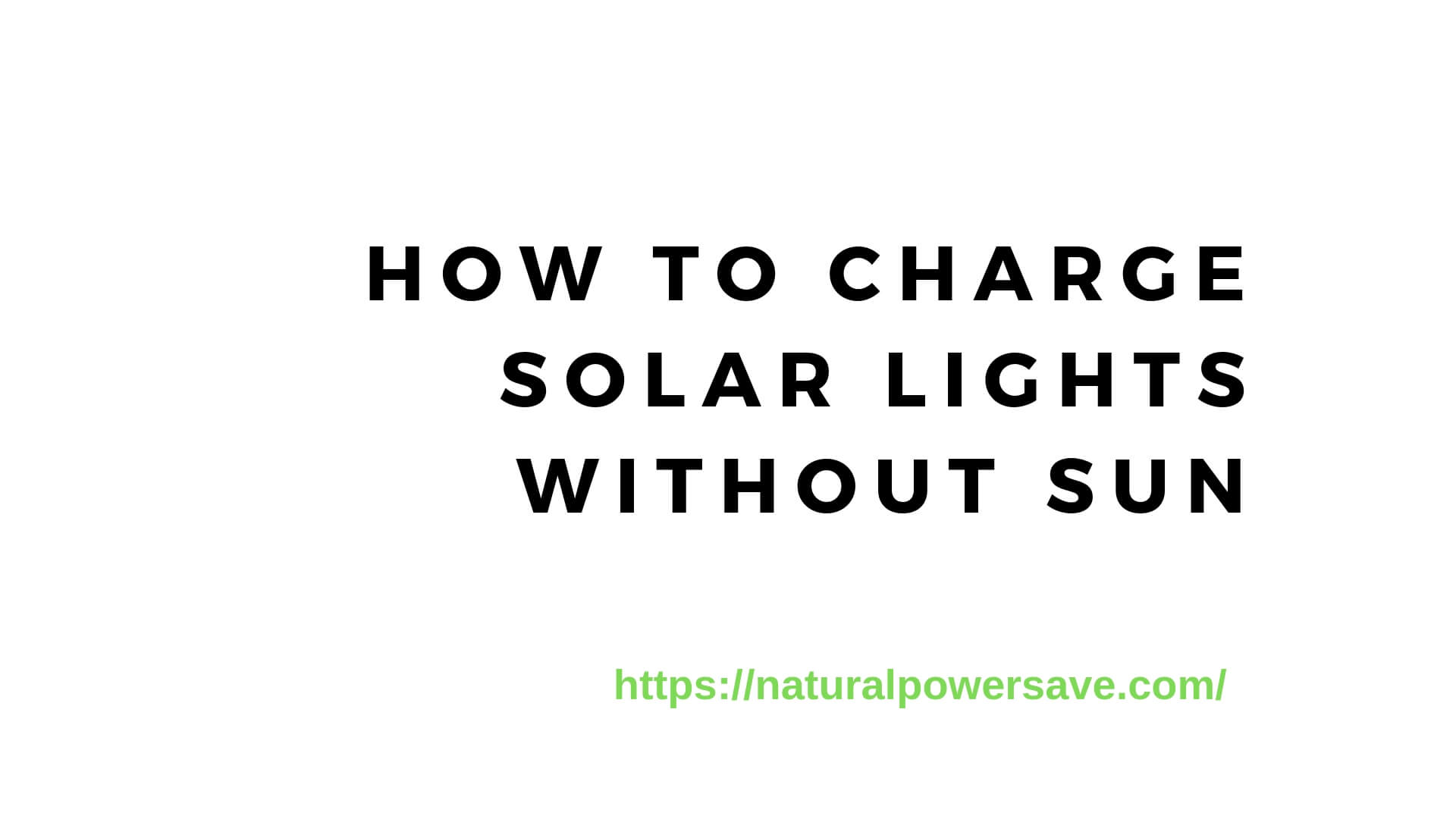 Solar power is an excellent source of renewable energy for homes that are very practical to use in a household. It just sits there and harnesses power from the sun (which is out almost every day!) and is just convenient production of energy. Solar energy has many advantages and disadvantages – all of which you can find out here.

With that said, there are days where the sun does not shine as brightly as usual. There are also some regions where the sun is not out for the majority of the time. That’s why we’re going to talk about how to charge solar lights without the sun.

But first, let’s talk about the general rule of thumb about solar lights.

The short answer is no.

Solar lights do not require direct exposure to sunlight to charge. They can charge by using any form of light. It means that you can charge them using indirect sunlight (e.g., cloudy days) or artificial lights (e.g., incandescent light bulbs or LED lamps).

How to Charge Solar Lights Without Sun

You can do several workarounds when your solar lights are low in power and there is no sun out there. Some methods are less effective than others, and some are much more recommended to do.

But in general, we’re going to divide them into two categories: indoor charging and outdoor charging.

How to Charge Solar Lights Indoors

Indoor solar lights charging is not highly recommended because both methods require power to produce solar power – which is counterproductive.

But incandescent light has characteristics that emit lightwave similar to sunlight. That light wave is what makes solar cells respond, collect, and convert light into energy.

It’ll charge your solar lights enough, but not nearly as effective and efficient as sunlight. The efficiency of incandescent light bulbs for charging solar lights is around 80% from that of sunlight. It means that if you usually need 4 hours of sunlight to charge your flashlight fully, it’s going to take around 6 hours to do that with incandescent light bulbs.

Most light bulbs produce between 40 – 100 watts of light. The bigger the wattage, the faster your solar lights will charge.

LED lights emit visible light, long infrared waves, and ultraviolet waves. These waves are the same that the sun creates. However, most household lights do not produce enough ultraviolet waves to power your solar lights the way sunlight does.

It makes sense because you don’t want to have too much exposure to ultraviolet waves inside your house – that’s what you avoid by building a house in the first place.

Much like incandescent light bulbs, LED lights are not the most effective way to charge your solar lights since you use power to produce power – but it is a good option in emergencies.

How to Charge Solar Light Outdoors

The best way to charge solar lights outdoor is, obviously, with the sun. However, in cloudy days, winters, and other low-sunlight situations, you might need an alternative method for charging.

It’s worth noting that solar panels can still collect energy even when it’s cloudy – as long as there’s a sliver of light. So, your solar light still collects charge on cloudy days – just much slower.

One of the best ways to charge your solar lights without direct sun exposure is by moving them in the direction of the sun every couple of hours.

As we all know, the sun rises in the east and sets in the west, which is still the case even when you can’t see the sun. You can move your solar lights’ position to directly face the sun every few hours to ensure it charges at the most efficient rate.

Charge Your Solar Light with Mirrors

When tall buildings or dense trees surround your house, there might be limited access to direct sunlight.

In that case, you can use mirrors to reflect the sunlight to hit your solar light. That way, you don’t need to step out of your house to charge your solar lights. Technically, this method still requires the sun, but it’s a workaround that you can do when you have limited access to direct sunlight.

Since solar lights are an alternative and renewable energy that harness the sun’s power, it’s quite difficult to charge them without direct exposure to sunlight. However, there are workarounds that you can do in case of emergency or urgent need to use your solar-powered appliances. We hope that this article gives you an insight into how to charge solar lights without sun.