What do nuclear engineers do 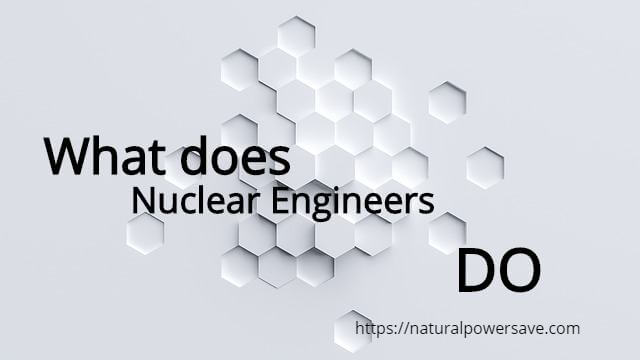 What You Want to Know about What Nuclear Engineers Do

The Origin of Nuclear Engineering

Nuclear Engineering was developed and discovered on the late 20th century ranging from 1845 to 1945.

Over the past six years, the whole development was merely focused on the atomic bomb. It was discovered by two German physicists namely Fritz Strassman and Otto Hahn. It began when they split a uranium atom.

Embarking in their research, an Australian-born physicist named Lise Meitner who flew to Sweden after Hitler seized Germany. She had concluded that the uranium split released energy called fission. Germany was tipped off with a letter signed by scientists including Einstein, thereby, said that Germany could develop such a powerful weapon.

That is when the U.S decided to launch a top-secret way to develop an atomic bomb also called the Manhattan Project. After the launching, the said country dropped off two atomic bombs in late 1945 in Japan that ended World War II.

What Do Nuclear Engineers Do?

They developed other useful devices that will be used in generating nuclear energy and radiation. Nuclear Engineers also are responsible for observing and monitoring nuclear equipment and grasping emergency quickly.

How Can You Become a Nuclear Engineer?

Several Nuclear Engineering jobs require least ways and master’s degree. They must earn at least a bachelor’s degree from an ABET – accredited university that usually takes up to 4 years and some foundation and programs provide secured employment, earn some certifications, continue to graduate school and become professionally licensed.

Students who are interested in studying this course should take up common high school courses in mathematics major, such as trigonometry, calculus and algebra and also Science major such as, physics, chemistry, and biology.

Some of the private and public college universities offer an accelerated option for students who can multitask and handle loads of work save money and time this is the five-year master’s and bachelor’s degrees.

Labor Environment of a Nuclear Engineer

A Nuclear Engineer’s workplace depends upon the industry they were employed. Some typically work in secluded offices usually uses computers to analyze data, research, and monitor new equipment designs and utilize the behavior of nuclear energy.

Some of Nuclear Engineers who work for private power companies are found working on the floor of where the plant is, while most of them work in a very hectic and full-time schedule.